Here’s a little DIY project at home you can make during self-isolation: pressed flower cards. I started this project at the end of last year but did not make the cards until this last week. I am nearly 37 weeks pregnant and I really have to slow down and let my body rest. I have been too sore in my pelvis to do much standing (and cooking) the last week. The house is an absolute mess and completely disorganised as we are in the process of doing a mini-makeover (but surprisingly I’m ok with that!) I’ve been sleeping a lot and trying to rest as much as I can and I feel better for it.

I’ve always wanted to make my own cards but lacked inspiration of how to decorate cards. I was watching an episode of Gardening Australia last year where they pressed some flowers and thought pressed flowers would work well on cards.

Last November when we were still living in Canberra, I picked some flowers (and leaves) from a friend’s garden and pressed them between sheets of newspaper and paper in a stack of books. I was also given two beautiful bouquets of flowers towards the end of last year and pressed some of the roses and flowers from those bouquets. 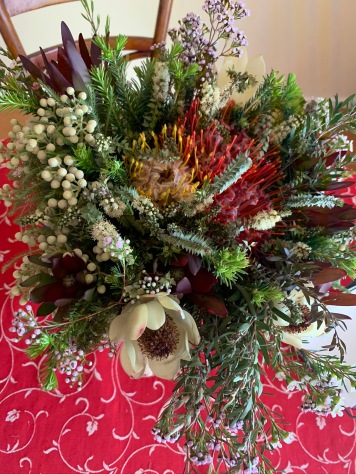 I dried some flowers from this native bouquet of flowers I received. 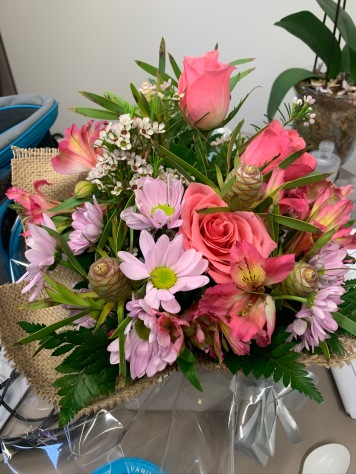 As this bouquet got to its end of life, I decide to dry some of the roses.

Altogether I had picked about 50 different flowers, leaves and shrubbery to dry. I laid the flowers on sheets of paper and tried to group thick flowers and shrubs together so they would press evenly under the books (some flowers, like roses, I put on its side because they are quite thick).

I put a couple of sheets of paper on either side of the sheet with flower and stacked under a book. I must have had 15 heavy books stacked and between each pair of books I had my specimens. I left it for a good couple of weeks and checked every now and again.

I had intended on making the cards a lot earlier than I have but I got side tracked with other projects! Last week I found the dried flowers and decided it was time to make some cards. I’ve made six cards here. I used stick glue and superglue to stick the flowers on the cards which I regret because it became messy and the glue showed on the cards (ok for a 5 year old kid but not so classy as an adult). I would definitely get some craft glue and be patient with the process (perhaps in hindsight I probably would have used tweezers to help place and stick the flowers where I wanted). I was happy with only two of the cards I made and left it a good four or five days and came back to and kept tinkering with the other cards until I was happy. As you can see from the pictures I also used some jute twine. Let me know – what’s your favourite design? If you decide to make some cards, I’d love to see your designs too. 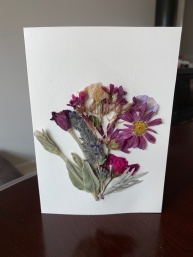